Kaseto 2.2 Can Resume Playback at Startup

The new version 2.2 comes with several new features and bug fixes. Now, Kaseto can resume playback exactly where it ended last time when exiting the application. This works not only when Kaseto is restarted regularly, but even when Windows has crashed during playback. By default, Kaseto only resumes playback of audiobooks at startup, but not for music. However, this can be changed in the settings. There are three options available: always start with an empty playback (as in previous Kaseto versions), resume only audiobooks at startup, or resume both audiobooks and music at startup. 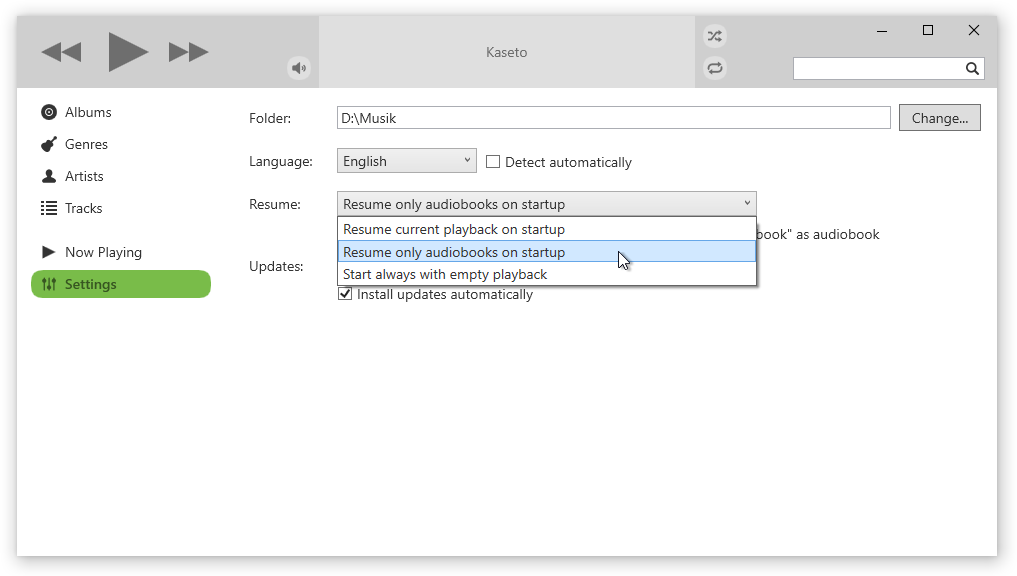 In the new version, Kaseto can seamlessly switch between speakers and Bluetooth headphones during playback. For example, if the music is currently playing on the speakers and then Bluetooth headphones are connected, Kaseto will automatically switch the music playback to the headphones. In previous versions, it was necessary to restart Kaseto. This is no longer necessary with Kaseto 2.2.

Furthermore, there are many new discreet mouse hover effects, so that it is immediately recognizable which elements in Kaseto are clickable and which are not. In addition, it is possible now to drag and drop audio files into other applications, for example, to play the audio files there.

In the new version of Kaseto, two bugs have also been fixed: When changing the volume in Kaseto itself, the adjusted volume was correctly visually displayed after restarting Kaseto 2.1 or prior, but was not reflected by the audio playback itself. Now, volume changes are correctly applied and saved, even after restarting Kaseto. In addition, selecting multiple albums or songs while holding the Shift key now works correctly and exactly as expected for a Windows application.